A downloadable game for Windows and Linux

Where are we going? As individuals... as a species... what awaits us at the end of this road? Is there an end? Was there an beginning? Does this road symbolize real life in the sense that there's no turning back? And how does pineapple juice fit into all this? Maybe I should just shut up, Buck Up And Drive!

Features:
- Endless driving game inspired by arcade classics, with simple yet intense gameplay featuring a total slap in the face of realism. And a kick in the spleen, too!
- Procedurally generated track with multiple environments to visit, ranging from the somewhat realistic to the completely absurd. GO TO HELL!... literally!
- PINK. BACKFLIPPING. TRUCKS. ON THE FUCKING MOON.
- Go 1v1 against another player (or a CPU) in a fighting mode. With cars. I dunno either, I came up with it while in the shower.
- Customizable car decals through external image files. Put "eggplants" all over the cars, for all I care!
- Controls for both game modes are 8 directions and one button. Play one-handed, if you want! Keep your other hand for... holding orange juice! Yes!
- Available for both Windows and Ubuntu (other Linux distros may work).
- After the game is on Steam (will take a bit though), I will let those that buy the game here to claim a Steam key later!

(More features were planned for after release, but such became impractical. I elaborate on that in this post.)

Demo Content (v1.1.1 DEMO):
- One playable car, Ferrero, with all 16 colors and support for custom decals.
- Driving mode with 5 environments to cycle through. A few gameplay segments aren't present, and scores won't save. Game settings will still save, though!
- 1v1 mode with the same environments to pick from as the driving mode. It's mechanically identical to the full game, only lacking cosmetic variety.
- A couple secrets to find.

Of note: This game is meant to run at 60fps. If you can't get that on your machine and are experiencing slowdown, lowering the resolution may help on older/lower end hardware.

In order to download this game you must purchase it at or above the minimum price of $7.99 USD. You will get access to the following files:

THIS GAME HAS A FIGHTING GAME MODE??? EVERYONE SHOULD GET IT

This game is absolutely godlike. It nailed the mechanics and sensation of driving at high speeds and causing mayhem on the road. Every element to make this feel as incredible as it does was fine-tuned to near perfection. The developer even made sure that grinding against rails didn't slow you down and instead gave off grind sparks, and when grinding on rails on one side, switching while still grinding would have you jump to the opposite rails. My only one major complaint is that when boosting, your hurtbox for knocking other cars off the road ends far too quickly. It's reflected in your bar, sure, but your car is still going fast and is illustrated by the speed lines. It's hard to get a handle on when your car can or can't hurt other cars in the heat of the moment when your eyes are focused on the road. I do think buffing the hurtbox duration would be a much better idea, as relying predominantly on your fighting game moves makes it very hard to rack up points and run into the cops faster. Otherwise, this is an outstanding game and one of my favorites from this year. If the hurtbox for boosts is better balanced, I'll come back and give this game a higher rating.

Hey, it does now after it got an update! You can check it out on the demo!

Made a video for the full release

its awesome reminds me of auto modellista in terms of style

There goes my preorder

after playing the demo i realized that this game is as fantastic as the videos i had seen on twitter, congratulations, it's amazingly good!

I liked absolutely everything, every decision you made!

this demo has NOTHING that deserves criticism to improve.

Nice gameplay and graphics, makes you feel like takumi from initial di and make a tear for Sega drive games

Amazing game, amazing visuals! This game is featured on my Week's Top 5!

It is more an action title than a simulation - which is a good thing (from my point of view, at least ;).

Just some 1st impressions (testing it under GNU/Linux on with 'Logitech Gamepad F310' controller with a friend):

- controller support works, but should be improved:

o left analogue stick (LS) is too sensitive in menus - so one has to use      D-PAD as LS is not usable in menus ... this should be changed as

o 1st we were not able to use 2 controllers ... when it worked, it was not

the same quality as playing alone (seems much less responsive)

o only one controller could initiate pause/menu by Back button ...          and unfortunately that controller changed mid game (or when starting      the locMuPl mode) - would be better when both controller can initiate      pause (i.e. start button invokes main menu) and also to determine      P1 and this major controller by 1st button pressed and keep it till      the game is closed.

Would be nice if the demo would be updated in case the game is improved (and will directly test it in that case), so one can judge about the quality before buying this game.  From my point of view it is interesting ... but not ripe for a full featured game from a technical perspective.

By the way ... is there some intent to put it on other platforms like GOG later  (I like itch.io, but unfortunately there are only payment methods common to USA, not EU - so e.g. PaySafe is not possible on itch.io, unfortunately).

Best wishes - and keep up your good work!
Reply
Skoopa132 days ago(+1)

The only game to ever make me experience road rage.

... weird, that segment's been removed from the demo.

Super Duper cool Game. Had a lot of fun. It feels very satisfying

amazing game I love it cant wait for some more

Man I have been following on twitter for so long, great to see this project coming to life!!

If you ever wanted to beat the living crap out of the cars that make up the traffic in Outrun this is the game for you! Also, air drifting hadoukens, what's there no to love?

The game slaps...it reminds me of the speed racer game on the  wii but, waaaaaaaaa better

Criticisms and suggestions after playing the early demo...
- While I was able to figure things out like being able to aerial drift and better avoiding obstacles while jumping off rails, tips sprinkled in the game each loss or somewhere may prove convenient for players that get discouraged easily or may not realize certain possibilities with the controls. I can understand just letting people realize these techniques themselves though.
- The timer is a lil too strict sometimes; quite unforgiving towards loss of momentum or a couple crashes. Are more time bonuses beyond checkpoints being considered?
- Upon landing a Hurricane Drift, there are moments where I might have performed it too late and ended up trading blows between the car and the attack. Would giving the attack invincibility frames make it too overpowered?
- There are moments where the player's car might go fast for them to react to what's ahead due to vehicles and/or flying dummies blocking their view. It's because of this that I feel maybe the Boost Tackle's active time should depend on the player's current or max speed attained, so the player doesn't have to be too cautious.
- Police car tends to hit me sometimes when moving back to its position in front of the player car if they were not struck before.
- This one might be an iffy take, but with drifting being vital to playing the game to the point where you are allowed to perform it on straight roads, coupled with the strict timer, the ability to simply drive normally feels less important than it should and makes me believe I should always be drifting instead. Of course, I could just not be realizing how many times I had to not drift, but I thought I'd still put this thought out there as well in the chance that something could be done about it.

All that aside, I really enjoyed the demo and I look forward to the full game!

Awesome. Except it desperately needs a proper tutorial. Still not sure how to actually do a hurricane drift

Edit : tried it a few more times and almost reached the end of the second stage on the beach lol. I honestly feel a separate button for doing a hurricane drift would be better. Maybe a double tap of the up arrow or something like that because aiming with left and right arrow and then trying to do a hurricane as well isn't really too intuitive. Amazing none the less and probably one of the most crazy games ever though lol

I don't understand anything that's going on but I like it

Can't wait to get goomba stomped by a beetle

Buckle up, everyone. (Get it? ‘cause it’s a driving game?)

GIVE IT TO ME NOW

LET'S GOOOOO My body is ready for this one!!

I'm going to commit so many road safety violation here

Hype train has arrived at the station, now boarding 😎 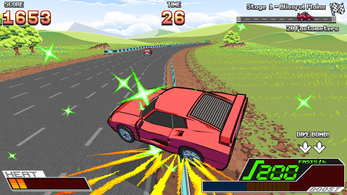 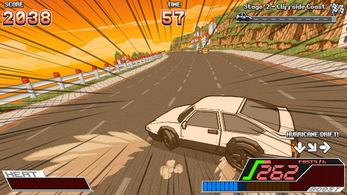 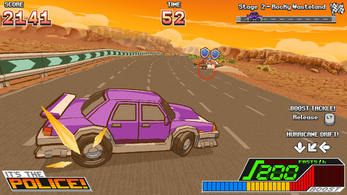 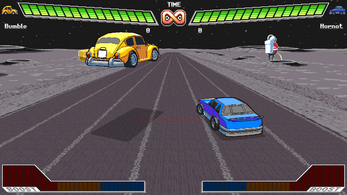 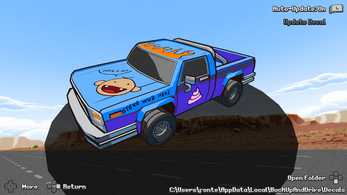