A downloadable game for Windows and Linux

!!!THIS IS CURRENTLY BEING OVERHAULED IN A NEW ENGINE. YOU CAN READ ABOUT IT IN DETAIL HERE!!!

The Scale army has occupied the Duchy of Carroten. Many of it's people have been taken hostage, including the Duke's daughter Hop. You are a mercenary who's taken to turning the desperate situation around. They are many, and they are strong. You are but one.

Overall Features:
- Action platformer with deep combat that will test your reflexes and usage of a varied moveset.
- Explorable levels with secrets to find.
- Face yourself against a friend or the CPU in Duel mode as Dunkehr or one of the campaign's bosses.
- Visuals reminiscent of the 16-bit era.
- Parry arrows with your teeth!
- Rideable ostriches.

Following builds (prior to release) are to be released exclusively to Patreon supporters, linked above if you're interested!

Reply
Retrocarus1 year ago
I liked the Dunkehr game. I hope the full version also comes.
Reply
Kikasuru1 year ago(+1)

Ay! A really cool game I must admit!

I enjoy how the game is designed and pretty it is!

I like there is no lives that we could lose after dying and would eventually make us retry to beat the level from the very beginning if we lost them.

Moreover the enemies have well animated attacks and are rather diversified. The shielded lizard acted goofy at some point, when I was too far away from him - he seemed to simply stand in one place and wait for me to come to him so he could attack me. I dunno whether it was your intention or not, but I am convinced he should at least take some steps towards the player instead of guarding one spot :P

I had little problems with the lizard boss, but that's a positive I guess! Bosses can't be too easy. I figured out after a while that you should jump over him and backstab him few times and repeat the sequence.

Some people have complained here about the sewer passage not being obvious enough and I think that can happen to be an obsticle for some folks - especially those who don't talk to the NPCs, so you could add some lighter texture on it to avoid such problems.

I am keeping my fingers crossed for the final product!

Last but not least, I got some questions:

1) When are you planning to release the final version of the game?

2) Where is the game going to be released? Only on itch.io or perhaps on Steam too?

3) What is the price of the game going to be? Maybe you're planning to publish it for free?

4) Will it be possible to beat the campaign in local coop?

Hey, thanks for giving it a go and glad ye dug it! For the Iguani's odd behavior, yes, that's indeed a bug in their A.I. Haven't fixed that yet, but it's on the to-do list. As for your questions:

2) Steam is in the plans, yes. For anything else, we'll have to see how things go, but PC's all I'm focusing on for now.

3) Price is yet to be determined, and I want to have a bigger demo done (more representative of the game's scope) before announcing it.

4) Duel is currently the only multiplayer mode in the works. Anything other than that, It's best to keep it as post-1.0 content to keep scope in check.

Thanks for the reply and addressing to the questions I've asked!

I'm glad you're not rushing with the game release, as working under pressure never ends well (ekhm - Cyberpunk). Your game has a lot of potential and I believe the final product will be awesome!

To be completely honest local coop, for me, is the thing this game needs. I am not intending to somehow force you to consider this mode, but local coop was the first thing I thought of when I saw your game, especially when there was another character in the duel mode :P

Anyways, I am wishing you luck with finishing the game!

"I want to keep scope in check" is one of the most reassuring thing an indie developper can say to sell his game to me.

Liked, subscribed, all that - waiting for release~

Had fun playing, but too furry for my taste

This game is amazing! Also, the fact that you are doing this on your own is mind-blowing. You are very skilled.

Hi, your game really shines - we enjoyed it.

I did not find the entrance to the sewers at first - but when explaining to a friend I got the tip - one has to read ... maybe I was to fast.  ;)

But we found a few points to improve upon:

- The options should be saved for next game (e.g. FullHD resolution, fullscreen mode, controls {defaults for gamepad are OK}).

- The same is true for duel mode - would be nice to keep the selected player/color/(control) combination for further duels - so one can change or confirm the former choices. And directly after a duel maybe a button to repeat the duel with the previous settings.

- Maybe it is just lack of practice but the big crocodile boss enemy is really hard - and in duel mode one can not escape a fast repeating attack. But as we just tried the game it's not sure if this is a lack of balance concerning gameplay or just a lack of practice.

It is really on track to become a very nice game - keep up your good work!

Hey, glad ye dug it! In regards to your points:

- At the time of this writing saving for the settings has been implemented. It'll be a while till I release a new public demo, but once I do that will definitely be in!

- A lot is still to be done for Duel, so yes, all of that is definitely planned for a full release.And yes, that also includes some needed balancing.

- Lol, yeah, the Gater boss is due to some tweaks, though nothing too drastic. Mostly give him some more openings for the player to exploit.

Thanks! I see you had some issues with the sewer entrance. I really need to make that one a bit more obvious, noticed some people having issues with it.

SUPAAA! I love it! I'm waiting  for the finished product!

Thanks! Feel free to check the other links above for more if you'd like!

As someone who grew up on the Gameboy Advance, I love how accurately this game captures how it felt to play on the beloved handheld.

Nostalgia aside, this is shaping up to be a really good game. Art looks great and gameplay is quite enjoyable. Really looking forward to this one.

Hey, thanks! And I've been getting the GBA comparisons a fair bit, indeed. Bit of an underrated platform in some aspects.

It was so gooddddd, I love it a lot. Reminds me of those old rpg games that I've played, and also resembles metal slug a lot. I'm suck at playing it though. I love the art and how action packed this game is. Also forgot to ride the ostrich, which is epic.

Hey, thanks for checking it out, and glad ye liked it!

Whyyyy did it take you so long to make this lol.
I love this game, I can't wait to see the final product.

But hey, glad to hear ya dig it! 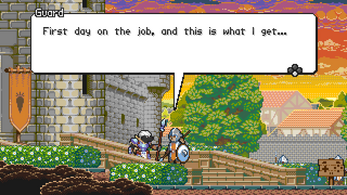 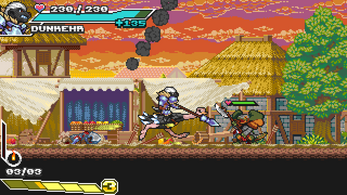 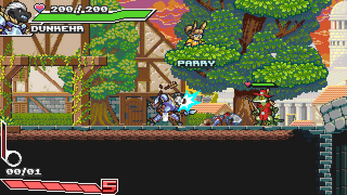 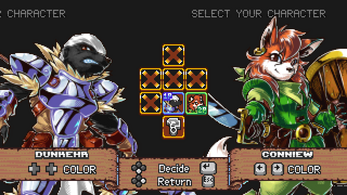